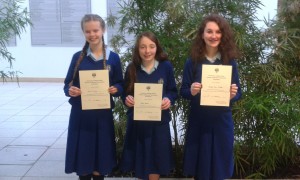 On Thursday 25 February the Dublin Brigade Irish Volunteers visited the school with their 1916 Exhibition.  Paul, Ronnie and Dermot engaged the students with their stories of those who took part in the Rising and the students were then invited to examine the vast array of memorabilia they had brought with them.  It was a great start to our commemorations of the 1916 Rising.